A NEWLYWED’S GUIDE TO FORTUNE AND MURDER, June 2023

With her new husband George busy on a special mission for the British Museum, Frances has taken on an assignment of her own. The dowager Viscountess Wingate needs someone to sponsor her niece, Kate, for presentation to Queen Victoria. Frances—who understands society’s quirks and constraints as only an outsider can—is the perfect candidate. Kate is charming and intelligent, though perhaps not quite as sheltered as she might first appear. More worrying to Frances is the viscountess’s sudden deterioration. The usually formidable dowager has become shockingly frail, and Frances suspects someone may be drugging her. The spotlight falls on Kate, who stands to inherit if her aunt passes, yet there are plenty of other likely candidates within the dowager’s household, both above and belowstairs.

Joining forces with her beloved George, Frances comes to believe that the late viscount, too, was targeted. And with the dowager seeming to be in greater danger every day, they must flush out the villain before she follows in her husband’s footsteps, directly to the grave . . .

A BRIDE’S GUIDE TO MARRIAGE AND MURDER, June 2022

On the eve of her marriage to George Hazelton, Frances has a great deal more on her mind than flowers and seating arrangements. The Connors and the Bainbridges, two families of American robber barons, have taken up residence in London, and their bitter rivalry is spilling over into the highest social circles. At the request of her brother, Alonzo, who is quite taken with Miss Madeline Connor, Frances has invited the Connor family to her wedding. Meanwhile, Frances’s mother has invited Mr. Bainbridge, and Frances fears the wedding may end up being newspaper-worthy for all the wrong reasons. 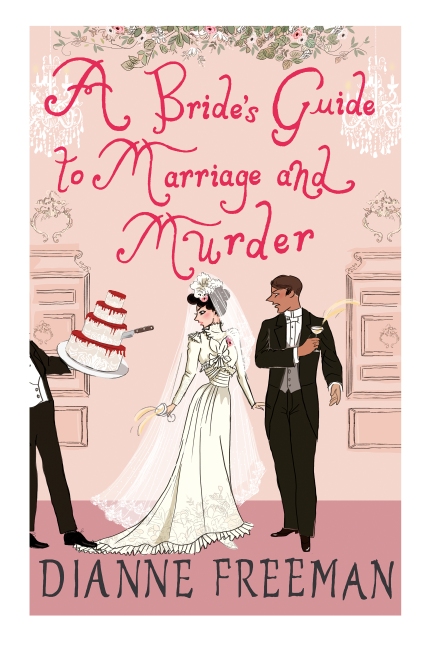 On the day itself, Frances is relieved to note that Madeline’s father is not among the guests assembled at the church. The reason for his absence, however, turns out to be most unfortunate: Mr. Connor is found murdered in his home. More shocking still, Alonzo is caught at the scene, holding the murder weapon.

Powerful and ruthless, Connor appears to have amassed a wealth of enemies alongside his fortune. Frances and George agree to put their wedding trip on hold to try and clear Alonzo’s name. But there are secrets to sift through, not just in the Bainbridge and Connor families, but also in their own. And with a killer determined to evade discovery at any cost—even if it means taking another life—Frances’s first days as a newlywed will be perilous indeed . . .

A FIANCEE’S GUIDE TO FIRST WIVES AND MURDER, July 2021

For Frances Wynn, widow to the late Earl of Harleigh, life has a cosmopolitan flavor of late. No sooner has she sent her mother and daughter off on a shopping trip to Paris than she and her fiancé, George Hazleton, are socializing with visiting members of the Russian royal family. 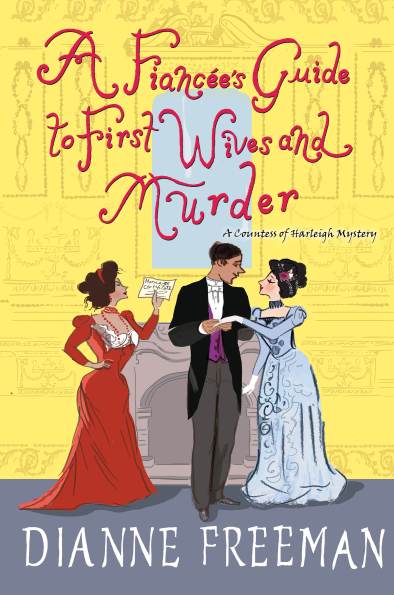 Yet amid this whirlwind, scandal also comes calling when Inspector Delaney turns up outside Frances’s house with a young French woman with a shocking claim: she is Mrs. George Hazelton.

As the future Mrs. George Hazelton, Frances assumes the woman is either lying or demented. “Mrs. Hazelton,” aka Irena, makes other outrageous statements. Among them, she insists that she is the illegitimate daughter of Russian royalty, that she has been abducted and held for ransom many times, and that someone is sending her threatening letters. When George arrives, he clarifies that he is certainly not married to Irena—though he can confirm her royal parentage. But even as he agrees to investigate whether Irena’s life is in danger, her claim proves tragically true. Irena is found strangled in Frances’ garden.

To uncover a killer—and clear their own names—Frances and George must determine which of Irena’s outlandish stories were based in fact, and who stood to benefit from her death. And as the search reaches a shocking conclusion, they may find that villainy lurks all too close to home . . .

A LADY’S GUIDE TO MISCHIEF AND MURDER, July 2020 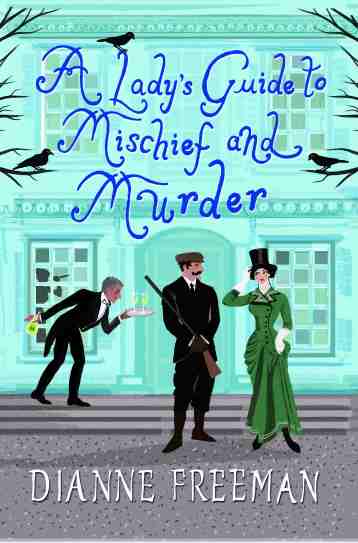 London is known for its bustle and intrigues, but the sedate English countryside can host—or hide—any number of secrets. Frances, the widowed Countess of Harleigh, needs a venue for her sister Lily’s imminent wedding, away from prying eyes. Risings, George Hazleton’s family estate in Hampshire, is a perfect choice, and soon Frances, her beloved George, and other guests have gathered to enjoy the usual country pursuits—shooting, horse riding, and romantic interludes in secluded gardens.
But the bucolic setting harbors a menace, and it’s not simply the arrival of Frances’s socially ambitious mother. Above and below stairs, mysterious accidents befall guests and staff alike. Before long, Frances suspects these “accidents” are deliberate, and fears that the intended victim is Lily’s fiancé, Leo. Frances’s mother is unimpressed by Lily’s groom-to-be and would much prefer that Lily find an aristocratic husband, just as Frances did. But now that Frances has found happiness with George—a man who loves her for much more than her dowry—she heartily approves of Lily’s choice. If she can just keep the couple safe from villains and meddling mamas.
As Frances and George search for the culprit among the assembled family, friends, and servants, more victims fall prey to the mayhem. Mishaps become full-blooded murder, and it seems that no one is safe. And unless Frances can quickly flush out the culprit, the peal of wedding bells may give way to another funeral toll. . . .

How far will some go to safeguard a secret? In the latest novel in Dianne Freeman’s witty and delightful h 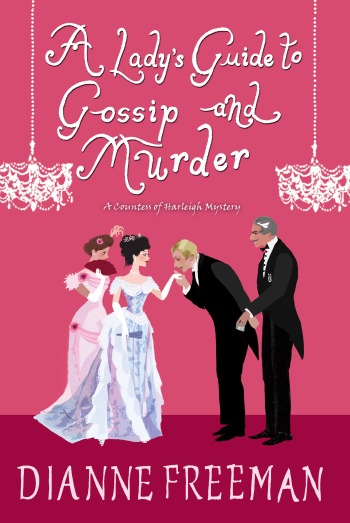 istorical mystery series, the adventurous Countess Harleigh finds out . . .
Though American by birth, Frances Wynn, the now-widowed Countess of Harleigh, has adapted admirably to the quirks and traditions of the British aristocracy. On August twelfth each year, otherwise known as the Glorious Twelfth, most members of the upper class retire to their country estates for grouse-shooting season. Frances has little interest in hunting—for birds or a second husband—and is expecting to spend a quiet few months in London with her almost-engaged sister, Lily, until the throng returns.
Instead, she’s immersed in a shocking mystery when a friend, Mary Archer, is found murdered. Frances had hoped Mary might make a suitable bride for her cousin, Charles, but their courtship recently fizzled out. Unfortunately, this puts Charles in the spotlight—along with dozens of others. It seems Mary had countless notes hidden in her home, detailing the private indiscretions of society’s elite. Frances can hardly believe that the genteel and genial Mary was a blackmailer, yet why else would she horde such juicy tidbits?
Aided by her gallant friend and neighbor, George Hazelton, Frances begins assisting the police in this highly sensitive case, learning more about her peers than she ever wished to know. Too many suspects may be worse than none at all—but even more worrying is that the number of victims is increasing too. And unless Frances takes care, she’ll soon find herself among them.

A LADY’S GUIDE TO ETIQUETTE AND MURDER, June 2018

Frances Wynn, the American-born Countess of Harleigh, enjoys more freedom as a widow than she did as a wife. After an obligatory year spent mourning her philandering husband, Reggie, she puts aside her drab black gowns, leaving the countryside and her money-grubbing in-laws behind. With her young daughter in tow, Frances rents a home in Belgravia and prepares to welcome her sister, Lily, arriving from New York—for her first London season.
No sooner has Frances begun her new life than the ghosts of he 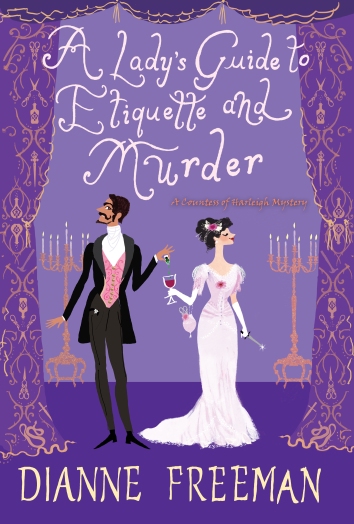 r old one make an unwelcome appearance. The Metropolitan police receive an anonymous letter implicating Frances in her husband’s death. Frances assures Inspector Delaney of her innocence, but she’s also keen to keep him from learning the scandalous circumstances of Reggie’s demise. As fate would have it, her dashing new neighbor, George Hazelton, is one of only two other people aware of the full story.
While busy with social engagements on Lily’s behalf, and worrying if Reggie really was murdered, Frances learns of mysterious burglaries plaguing London’s elite. The investigation brings death to her doorstep, and Frances rallies her wits, a circle of gossips, and the ever-chivalrous Mr. Hazelton to uncover the truth. A killer is in their midst, perhaps even among her sister’s suitors. And Frances must unmask the villain before Lily’s season—and their lives—come to a most unseemly end . .